Walter Hoffmeier’s houseboat, the PAL-O-MINE, appeared nothing like the mass-produced, molded fiberglass look-alikes of today. The PAL was hand-built from the keel-up, board by board, of natural woods. The hull had White Oak frames with Douglas Fir, the next most durable wood after Cypress, planking.

Overall, the boat measured 52-feet from the overhanging forward deck, beyond the stem, to the last plank of the enclosed back deck. What distinguished this home-built boat from all others, was the raised bow and stern sections and the lower center component of the cabin giving the PAL somewhat the look of a floating castle – or at least it seemed to a ten-year-old boy on first seeing it afloat. 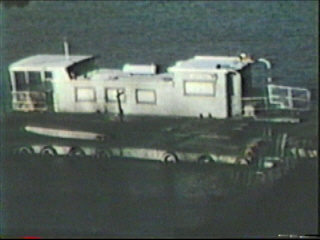 When other boats of its style were painted “steamboat white,” the PAL-O-MINE was trimmed in two shades of gray. On either end of the boat were ample areas surrounded by stout, steel railings covered from from top to deck in a narrow mesh fencing for the protection of the most inquisitive kids or dogs.

The back deck, protected overhead from the sun and rain by a roof, was where a collapsible table could be set in place that transformed the deck space into the setting for many sumptuous meals brought aboard in the picnic hampers Mother and Lorraine Hoffmeier had carefully prepared beforehand.

The PAL-O-MINE was at home at the Newport Yacht Club, on the Kentucky side of the Ohio River upstream and opposite the Cincinnati Public Landing during the era when Newport’s soiled reputation for gambling and prostitution was years, yet, from reformation.

The yacht club enjoyed it own notoriety. Once when reading aloud the boat club’s name set in bright red, neon letters displayed on the outside of the huge, wooden harbor boat, as we drove across the Central Bridge, my father warned… Read More